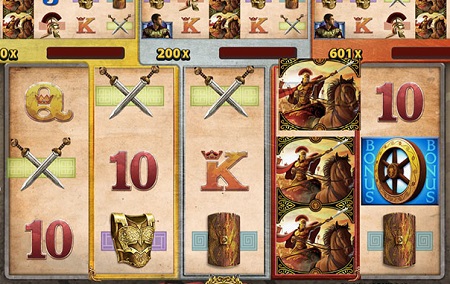 Roman Chariots was originally a very successful brick and mortar slot that WMS transitioned to online and mobile due to its popularity. The game has the normal five reels and twenty paylines, but also includes WMS’s supercharged reels function. Roman Chariots can be played both online and on mobile, but it is only available for mobile devices that have a Flash enabled browser. All of the twenty paylines in Roman Chariots are adjustable, meaning that you can play with as many or as few as you wish and bet between 0.20 up to 10 coins per line. This makes Roman Chariots not quite a penny slot, so it may not appeal to very low budget players.

Roman Chariots is a medium to high volatility slot, meaning that the big wins do happen, but you may have to wait for them. The smaller wins are there, but not as lucrative or as frequent as a slot with a low to medium volatility.

Roman Chariots is all about the ancient civilisation based in Rome, Italy. Known for its incredible architecture and fierce soldiers, the Romans are one of the most well known and well documented historical peoples. On the reels of Roman Chariots can be seen artefacts form that great age, including armour, swords, helmets, shields, horses and of course a full Roman Chariot. The lower paying symbols are from a deck of cards.

The graphics in Roman Chariots are exactly the same as the brick and mortar slot of the same name. That is to say that they are drawn but not in cartoon style. There is quite a bit of detail in the symbols and the background, but not enough to make the slot really exciting. The layout of Roman Chariots is pretty unique in the slot world, with not one but four reels on the screen. The main reel is below the three smaller ones, and takes up most of the picture.

Like many wilds in internet slots presented to you by canadiancasinosites.org, the wild symbols in Roman Chariots can be found on reels two, three or four. These will not only replace all other symbols in the game but also play a large role by charging the mini reels above the main set. Appearing stacked, these wilds can completely take over a whole reel on the main set. When this happens the reel above it will charge up and begin to spin. This will award you with a multiplier. Beware however; the entire charge can fall flat with just unlucky symbol. Roman Chariots was the first game that WMS brought out with the supercharged reel system.

The chariot wheel is the games bonus or scatter symbol, and can be found on reels one and five in the main set. One of these will grant you eight free spins and a two times your overall stake. The free spins take place on an entirely new set of reels, but still activate the supercharged reels. During this time as well there is no reset on the main set of reels, meaning an almost guaranteed win.