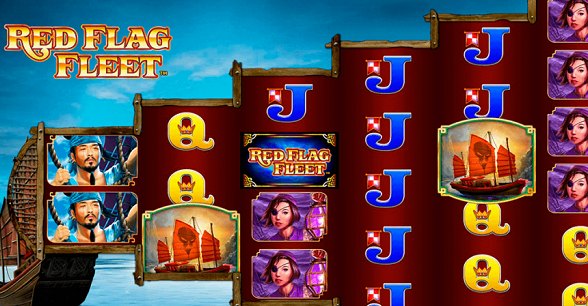 Red Flag Fleet is a rather innovative game by Williams Interactive Gaming. The slot has six reels, and a unique layout that looks like a sideways pyramid. The game’s 192 paylines are fixed, and offer a betting limit of .40 up to 80. This will put Red Flag Fleet out of the reach of those with a low budget, for fear of their bank roll diminishing faster than they would like. The games bet multiplier goes all the way up to 200 however, meaning that those with  a higher budget will enjoy taking a spin on the Chinese high seas.

Red Flag Fleet is a rather unique looking slot. The reels lie sideways, like a pyramid that has fallen over.  The first reel only has two symbols on it, increasing up to the sixth reel which has seven symbols. The graphics in Red Flag Fleet are also pretty good, not realist but detailed like in some slots at these iPhone optimized sites. With a very modern visage, Red Flag Fleet has crisp and bright looking graphics that will stand up to most other modern slots on the market. Behind the reels can be seen an ocean scene with a large Chinese junk floating on the water. The reels themselves are red, which stands out against the blue sea and sky back ground.

Pirates were not only limited to the Bahamas, China had their fair share of them as well. One very famous female pirate was named Chang Pao, and she struck fear into merchants, other pirates and the Chinese navy for many years. Red Flag Fleet is based on this theme, and most of the symbols reflect it. Various piratical characters throng the reels, each one being worth a bigger multiplier than the one before. The symbols in Red Flag Fleet do not pay out in coins but in multiples of your bet. The game’s logo is the wild symbol which will not only replace any other symbol in the game but is also the highest paying symbol for six of them in a row. At the bottom of the paytable we find symbols from a deck of cards.

Red Flag Fleet has a scatter symbol in the way of a large Chinas Junk with red sails. This can be found on all reels, and will grant the player free spins if they manage to find three or more of them. Three will reward you with 5 free spins, 4 will give you 12 free spins and 10 times your stake whilst 5 will give you 40 free spins and 50 times your stake. During the free spins round the reels will flip, making reel six with all seven symbols reel one, and reel one goes to reel six. This increases your chance of finding winning combinations. Not only this, but two to three reels will randomly become wild as well. This can also be retriggered during the free spins round by finding two or more Junk symbols again on your reels.