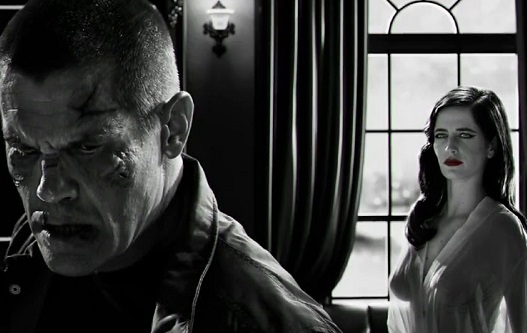 Sequel to comic book based movie Sin City, this film was released in 2014. In the same style that made the first film popular, Sin City: A Dame to Kill For returned to present fans and viewers with additional stories in and around this universe. The style is done in comic book style black and white, with colour being crept into random and important objects and aspects.

Definitely a unique presentation, the series has also been blessed with a good variety of cast members, across both films, and a well versed writer in the form of Frank Miller. He was joined in directing the movie by Robert Rodriguez. The film is laid out in such a way that this second film in the series has both sequel as well as prequel roles and scenes, designed ideally to broaden the complete perspective of this interesting universe.

The Sin City Story and Cast

The sequel to Sin City visits some 4 different stories and so whilst often relatable is not necessarily connected to each other throughout.

The particular tale in this film that followed the casino gaming and gambling aspects were the ones that starred the character Johnny, who is played by Joseph Gordon-Levitt. He opens his scenes with some wins on the slot machines, big wins, which he uses to parade around and gain access to the more private poker tables of the establishment. This is a backroom game of poker lead by Senator Roark, a man that doesn’t like to lose money. However on this long night to remember Johnny cleans out Roark and is then immediately warned to flee. Alas in classic arrogant gambler attitude he ignores this warning and rather decides to paint the town red with his new lady friend. The warnings turned out to be justified and Johnny was punished for his ignorance in kind.

Of course in classic Sin City style there is a lot of violence and action in the sequel, Sin City: A Dame to Kill For. With the vivid colour scheme the action that unfolds seems to feel surreal and definitely immersive. Unfortunately the ratings and reviews for this movie were not as high as was expected and the return from box office was also not as anticipated. Still, the fans of the Sin City style and comic books will probably still find aspects of it wildly entertaining and those that enjoy the darker side of gambling will also find a few of these scenes to be thought provoking and emotionally engaging.

Notes on the Cast and Gambling Industry

The cast in Sin City: A Dame to Kill For is as first rate as they come, with many of the actors from the first film making reappearances. This includes names like Mickey Rourke, Bruce Willis and newcomer Joseph Gordon-Levitt. The quality of the cast is suggestive of the presentation across the screen and well-comprised collection of actors definitely helps to sell the film.

As far casino gaming and wagering goes, this film utilises the industry well in its storyline to progress the story as well as augment personalities of characters and the situations they find themselves in. It enables players and risk enthusiasts to easily relate to a setting as well as interpret the moral and emotional undertaking the characters are experiencing in such a setting.